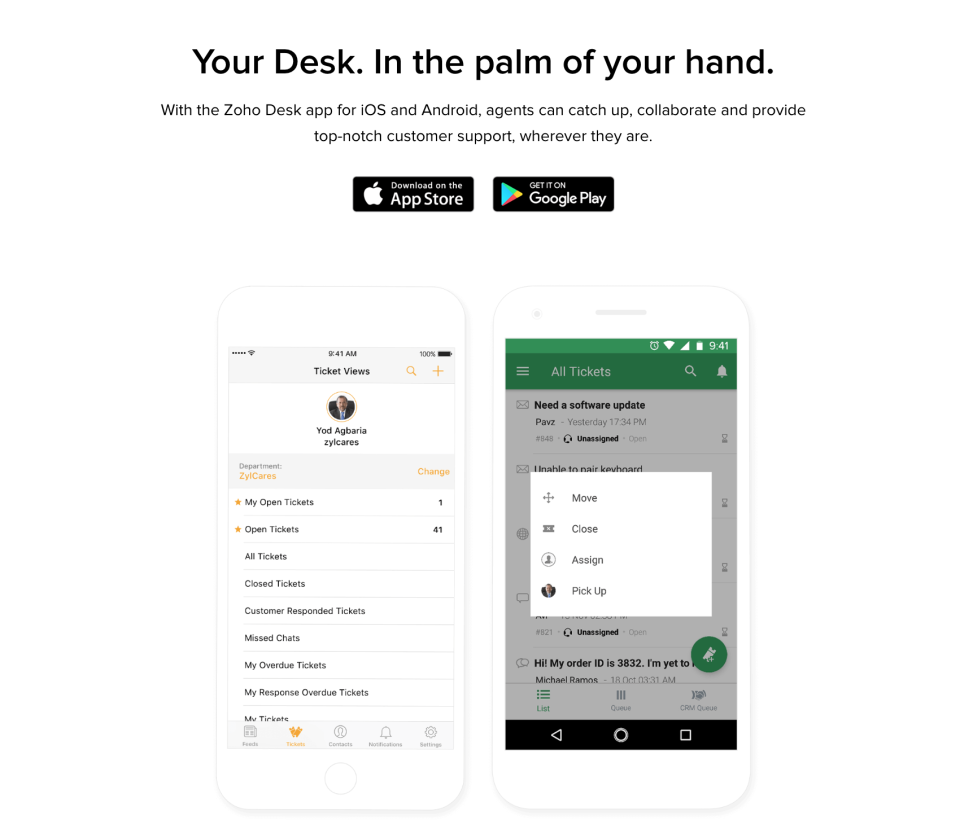 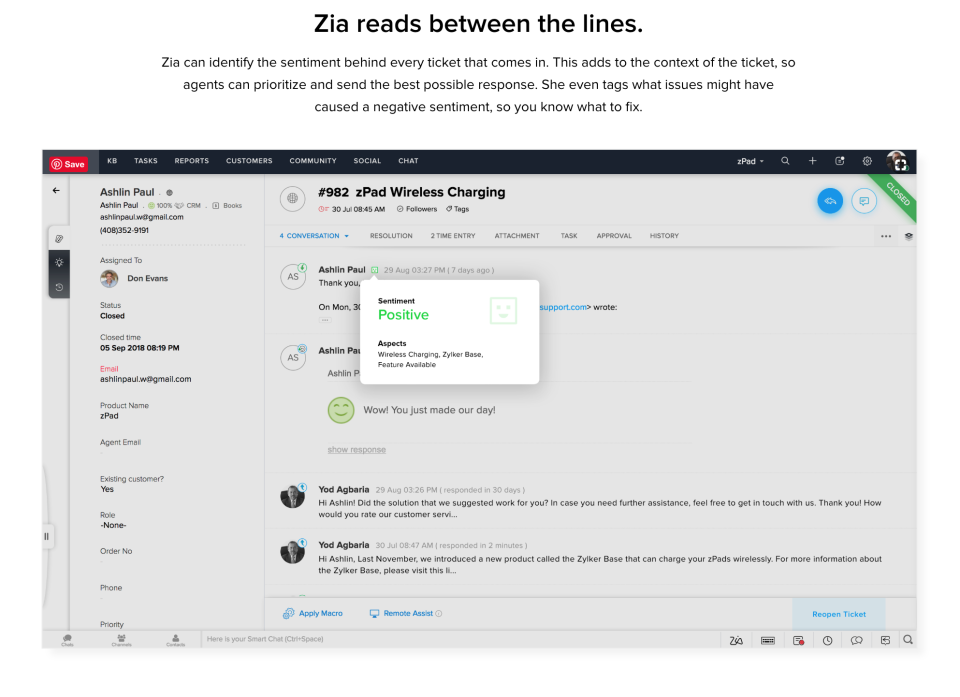 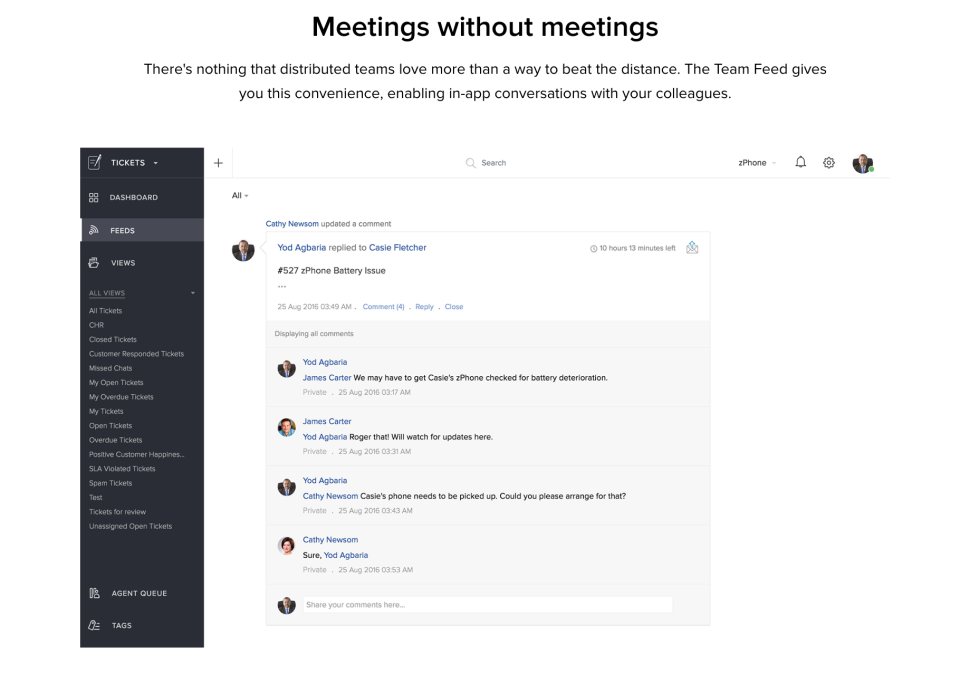 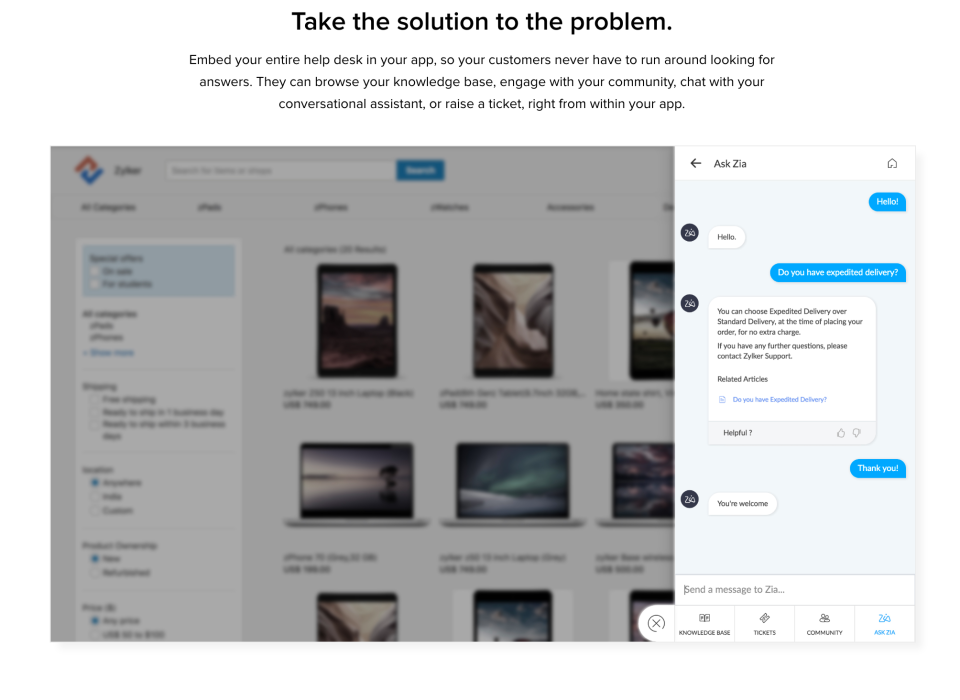 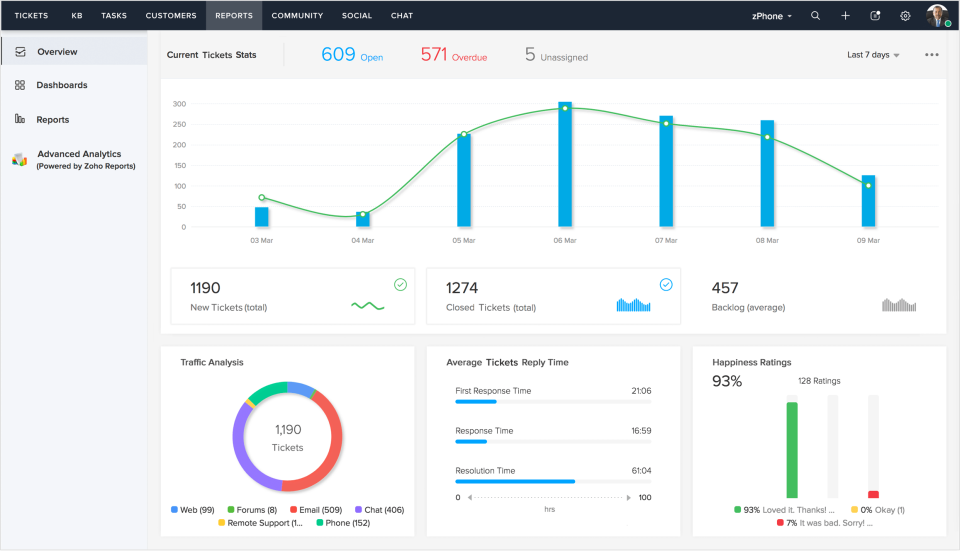 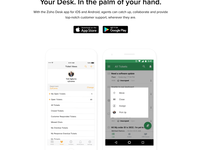 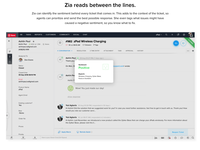 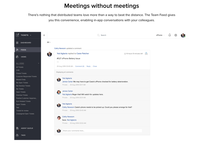 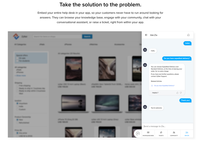 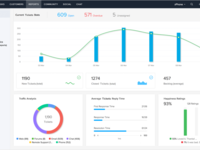 "Great on its own, OUTSTANDING when synced with Zoho CRM"

Pluspunten: The integration with Zoho CRM is game-changing. It's so simple to set up and gives our Sales + Customer Service teams complete transparency into what the other is doing. It's really intuitive — of all the Zoho apps, Desk is the best for ease-of-use and straightforward UI. I like it even more than Zendesk. Powerful automation features. Love the customer portal + knowledge base, we use it every day. Nice little features like snippets or copy-pasting knowledge base articles mean that ticket response is a breeze.

Minpunten: Sometimes some of the default email templates can be a little bit funky, but that was an easy fix.

Opmerkingen: Zoho Desk is an easy to learn help desk for most sized teams.

Pluspunten: Zoho Desk is an easy to use, easily scalable help desk option for teams of many sizes. The interface is intuitive​ and nicely designed. It is affordably priced compared to other options and integrates well with other Zoho products.

Minpunten: With the simplicity of Zoho Desk came a lack of more advanced tools. Otherwise, no complaints.

"So far it has been a great service"

Opmerkingen: We picked Zoho because of the worth and in this manner the indisputable reality that we were at that point familiar with their product arrangement as we utilize their Survey programming too. Things were getting lost or overlooked about and it had been making me insane. Zoho has a great set-up of items and this one isn't any special case! Simple to utilize (the essentials at any rate). What's more, it's very reasonable.

Pluspunten: I like the way that it converses with all or any of the rest of our Zoho items. It appears only an apparatus inside the framework. It plays pleasantly and interfaces in just barely like the rest of the items. I in reality simply like the appearance of the product, the format, and the way simple it's to utilize. we've thought that it was' improved our reaction times to inbound messages, and accordingly the speed at which we will answer and resolve clients' inquiries.

Minpunten: Most likely such a large number of alternatives accessible. huge amounts of your time spent up to this point simply understanding the whole stage. I'm despite everything perusing the UI yet it feels a touch less cordial than an elective decision I'm assessing.

"Everything is in BETA, after you are sold into a purchase..."

Opmerkingen: I realized I need a product that will fully integrate with my Google contacts and calendar, be able to track time spent on site or on a remote support session and be able to do this without switching and spending 5 minutes trying to get all of the information together for an invoice from: contacts; reentering the same job in Invoices instead of it linking to Desk, and move on to the next client.

Pluspunten: It was pretty easy to setup, they did have issues on their end with the custom domain pointing, but were willing to help out. HTTPS had to be requested and is not a part of the package unless you call up and request it.

Minpunten: I purchased a package from Zoho – Desk and Invoicing – so I can bill clients for time spent on a service call. Calls can be a remote support session or onsite.

After trying out their product and setting everything up with just Desk, their sales pitch led me to believe that their Invoicing product would be needed to integrate with Desk in order to bill clients directly.

The company then sent me an invoice to pay for an annual subscription for Desk and Invoice. I was told multiple times that I could use it on my phone and on the web. It would led me open a timesheet and connect it to the Desk ticket. Nope. Not on the phone though I was told otherwise.

So far, everything does not work as advertised.

The support reps keep telling me that their integrations are in BETA.

BETA was never mentioned during any of the calls or email until it did NOT work as advertised. I even have screen shots of the word BETA on the screens.

I would not recommend this product and would put up an advisory on your website indicating that most of their “integrations” are in BETA.

I am further contacting my bank and the Attorney General for California.

I don’t pay for BETA software.

Is there another company that actually fulfills their sales pitches?

Pluspunten: We have been using CRM for 7 years and needed more of a ticketing system instead.
While CRM is really good, the features of Support Contract, SLA and Ticket Status are really good.

Minpunten: Probably too many options available.
A lot of time spent so far just understanding the whole platform